From ancient and wondrous rainforests to rugged coastlines

Tasmania reveals itself slowly. From its ancient and wondrous temperate rainforests and distinctively rugged coastal parks, it demands your attention and time to discover why a substantial tract has been listed as a World Heritage Area, and regarded as one of the world’s top bushwalking destinations.

Tasmania’s ancient and varied landscape is worlds apart from the continent it belongs to. Forests of ancient conifers and fagus from the Jurassic Age, along with dramatic dolerite cliffs and mountains, are some of the features that make Tasmania’s scenery so special. While it does not have the massive scale of the Himalayas or the remarkable pinnacles of Patagonia, it is the last refuge for several mammals that once populated Australia, and one of the few places on earth where you can walk through pristine wilderness environments that have changed little since the time of the dinosaurs. With over 3000km of world class walking tracks, you can choose to walk through a variety of landscapes ranging from glacial tarns, to secluded ocean beaches, craggy mountain tops and ancient rainforests.

Tasmania’s spectacular wilderness will provide memories to last a lifetime

Given time, Tasmania will capture you, as it has so many others who have experienced its dramatic and spellbinding wilderness firsthand, and reward you with memories that will stay with you for a lifetime.

With over nineteen national parks and over 400 other reserves and conservation areas readily accessible from Hobart, Tasmania is a bushwalkers’ paradise.

20% of Tasmania’s landmass is listed as “World Heritage”

Formerly part of the Gondwana super-continent (created over 160 million years ago), Tasmania shares a similar floral legacy with its former neighbours in South America, New Zealand, and even Antarctica. Today you can still discover ancient Gondwana forests that include a large range of uniquely exquisite plantforms generally found nowhere else in the world.

A great variety of landforms and environments

Tasmania’s climatic history and topography have sculpted the landscape over time to create a great variety of landforms and environments including: spectacular fluted dolerite coastal cliff formations on the east and south; dry sclerophyll and wet temperate rainforests in the east and south west (containing the tallest hardwood forests on Earth with many trees reaching nearly 100 metres); alpine moorlands in the high and rugged mountain areas with “ice-chewed” remnants from past glaciations; and bleak wind-scoured button-grass plains in the remote far south west.

All are accessible, natural wilderness areas that will engage and involve you like no other region in Australia. Let us introduce to you an authentic bushwalking experience that will leave you with a memorable and lasting impression of one of the last temperate wilderness areas on Earth.

Tasmania’s isolation, diverse terrain and climate have allowed many species that did not survive on the mainland to thrive in this unique island environment. Some even hark back to the super-continent, Gondwana, including the burrowing freshwater crayfish (virtually unchanged for the last 200 million years, and still be found today in alpine tarns and creeks in the south west). 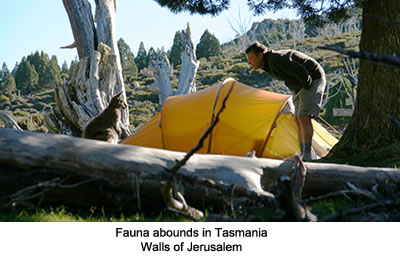 The largest marsupial carnivores in the world

Tasmania also boasts the largest marsupial carnivores in the world such as the famous Tasmanian Devil, the lesser known spotted and eastern quolls, and the now extinct Tasmanian Tiger. The island has also seen the arrival of Asian invaders some millions of years ago, such as rodents and bats who have now adapted to Tasmania’s special environment.

Despite early invasions, Tasmania has been largely spared the depredations of exotic species (foxes in particular) that have plagued the Australian mainland’s native wildlife. Tasmania’s remoteness and rugged mountain terrain has also limited European land clearing, and as a result, visitors to Tasmania’s wilderness areas can share and enjoy its unique fauna in a wide array of habitats throughout the island. Many of these creatures are most commonly (although not exclusively) seen at night in their natural habitat, and bushwalkers should expect to encounter a large range of wildlife, including:

Many of these species, now extinct on mainland Australia, survive only because of the diverse topography, geology, soils, vegetation and climatic conditions found in Tasmania’s parks and reserves. In fact, over two thirds of Tasmania’s 33 mammalian species alone can be found in the World Heritage Area. Sharing wilderness areas with these creatures is a very special experience that can only be encountered in remote places accessible by foot.

Despite Tasmania’s relatively small land mass of approximately 64,000 square km, it has a bountiful range of over 2,000 native and introduced flowering plant species, of which more than 200 are endemic to the State. 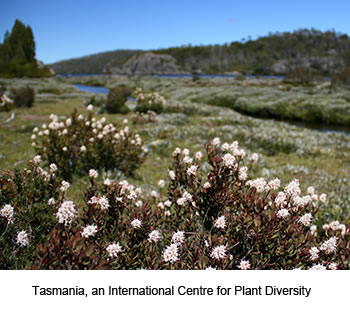 Tasmania’s mountainous landscapes, with over sixty peaks higher than 900m, generate marked differences in rainfall and humidity from west to east creating a great variety of microclimates and diverse soil types, which provide niches for a huge range of plant species.

Weathered and faulted rock surfaces, sculpted by past glaciers and eroded by heavy rains, also contribute to the range of soil types and plant environments supporting the variety of species. You can expect to encounter:

The World Conservation Union has officially recognised this rich mosaic of vegetation in these regions as an International Centre for Plant Diversity. Few regions in Australia, and indeed the world, offer so much in such a compact and accessible area.

Come and explore it with us! 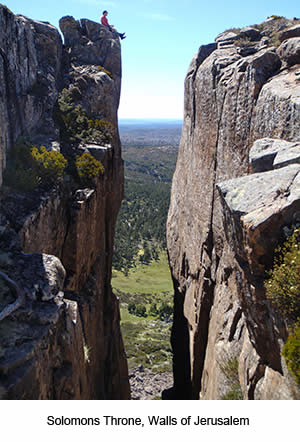 Tasmania is also a geologist’s paradise – it represents a rich panorama of evolutionary landforms dating to over one billion years ago; including some of the oldest Pre-Cambrian and Cambrian rocks in the southwest (greater than 500 million years ago) to the more recent Jurassic period (165 million years ago).

The break-up of Gondwana enriched this panorama when it triggered massive dolerite intrusions over much of the island. (Dolerite is a dark-coloured igneous rock which defines much of Tasmania and is especially notable in its national parks and reserves).

Visitors can also discover some of Australia’s biggest and deepest limestone caves, some of which held particular significance for Tasmania’s Aborigines, such as the Marakoopa caves.

Since these events, these landforms have been dramatically modified by erosion and glacial action, with the last of three glaciations finishing approximately 12,000 years ago.

The legacy of glaciated landforms is pervasive and dramatic

Erosion and glaciations, together with natural earth movements, have shaped the current topography and contributed to the variety of soils and environments that provide such a rich source of the earth’s evolutionary history.

On our tours, you can take the time to explore, absorb and wonder at this dramatic panoramic paradise!

Tasmania lies between latitudes of 40′ and 43′ south of the equator. However, despite this southerly location it enjoys a temperate and relatively mild climate, especially when compared with northern hemisphere countries that share similar latitudes. This is mainly due to Tasmania’s weather extremes being moderated by the surrounding sea, which is no further than 115 km from any point on the island.

The major weather influences are the “Roaring Forties” (the prevailing westerly winds) generating high winds and heavy rainfall on the west and northwest coast, and low pressure systems (which regularly encircle the globe at this southerly latitudes) creating rapid falls in temperature. These low pressure systems are generally short-lived, only serving to briefly punctuate Tasmania’s delightfully fresh, clean and invigorating climate. In midsummer daylight lasts for about 15 hours, and about nine in winter. Snow can occur any time during the year in alpine areas (with the heaviest snowfalls in July and August), but there is no permanent snowline.

Seasonal flooding is more frequent in winter when catchments are full, but can occur throughout the year without any warning in many river systems. Accordingly, bushwalkers should always take care when crossing streams or selecting campsites. During the summer months Tasmania may also experience bushfire conditions – characterised by extremely high temperatures, low humidity and strong northerly winds associated with extended periods of drought. Bushwalkers must be aware of any warnings and choose, as we do, to change or cancel planned walks if weather conditions compromise safety.

Tasmania’s temperatures range from occasional very hot days in summer to some bitterly cold nights in winter, although typically the weather is extremely pleasant. The table below shows examples of the temperature ranges for the areas we walk in:

Despite the extremes, Tasmania is renowned for having some of the most agreeable conditions in Australia for bushwalking and enjoying the great outdoors.

Come and enjoy it with us!