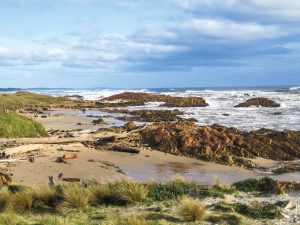 T1: Well defined and wide tracks on easy to moderate terrain, in slightly modified natural environments. You will require a modest level of fitness. Recommended          for beginners.

T2: Narrower but distinct tracks which can be muddy in some places, in pristine natural environments. Facilities are minimal and you will encounter few other walkers. You will require a reasonable level of fitness.

T3: Marked but often rough and indistinct tracks, often on irregular ground, muddy and wet, in very remote and wild areas. These are challenging walks needing a high level of fitness and some hiking experience.

We have all spent days relaxing on the beach, however it is only when you meet the rugged,
wind-swept Tarkine coastline that you understand the true beauty and power of an untouched landscape. The Tarkine coastline is not only breathtaking, but the expansive ocean beaches and huge surf create a powerful backdrop for the Tarkine Coastal Experience. It is a place of huge historical significance in Australia, with an Aboriginal history dating back thousands of years. Evidence of the takayna people, after whom the Tarkine is named, still remain dotted all over the coastline with some of the largest middens ever found in Australia along our expedition.

From Launceston we begin our journey into our favourite part of the state, the northwest. After a lunch stop and a gear check we wind our way through some of the greener pastures in Tasmania where some of these farm estates have been run by the same families for over 100 years.

As we approach the Tarkine coast, our first marker and the beginning of 6 days of bliss is the magnificent Arthur River. It is here we meet our expert 4WD crew that navigate any obstacle thrown in front of them on our journey to Sandy Cape.

Today is about an introduction to one of the remotest coastal areas in Australia, and preparation for the fantastic experience ahead. When meeting the Tarkine coastline for the first time, explore the sheltered bays and lighthouse, or if you’re game take a dive into the pristine waters of the Southern Ocean and see if you can spot an abalone. These unique creatures literally line the rocky boulders that form a large part of the sea floor.

Numerous species of kelp, shellfish, starfish and other colourful marine creatures make for fascinating swimming and diving possibilities. This is where we set up camp for the first night and dinner is served around a roaring camp fire. Allow yourself to be immersed in this wild and rugged landscape whilst breathing some of the cleanest air in the world.

Today we head south to Lagoon River, crossing a number of headlands and pristine rivers including the Italian River. The headlands provide spectacular views up and down the coast. The day’s walk includes encounters with midden sites and other examples of the Tarkine coast’s cultural heritage. The size of the larger middens is simply breathtaking and represents thousands of years of occupation of this land. Sitting high on the headlands are a number of hut depression sites marking the location of where the takayna people established their elaborate shelters.

The last bay we pass is Native Well Bay, a compact and protected bay strewn with giant bull kelp and orange lichen-covered granite boulders. Our camp is located just to the north of the Lagoon River. The coastline is laden with small rocky gulches creating sheltered waters ideal for swimming and observing the myriad of sea life found along the coast. Not far from camp are patches of native grasslands, inhabited by an abundance of local animal residents. We have often seen wombats, echidnas, wallabies and pademelons feeding at dusk on the native grasses surrounding camp.

Some of the photographs sent to us by prior guests of the local wildlife have been simply stunning. The combination of native Tasmanian wildlife feeding with the backdrop of the wild Tarkine coast is a scene that has remained the same, undisturbed for hundreds of years. Again, dinner is served around the campfire overlooking a west coast ocean sunset.

Today is a day of giant sand dunes, coastal wilderness views and further evidence of the native Tasmanian’s that once ruled this land. The middens we encounter today comprise the discarded shells of abalone, sea snails, bones of wallabies, seals and other prey. They represent thousands of years of inhabitation. According to the Australian Heritage Commission, the region is one of the world’s most significant archaeological regions providing tangible connection to the original inhabitants of the country.

For a great overview feel free to stroll to the top of the giant sand dunes. These aren’t your standard sand dunes, they are in fact the largest sand dunes in the Southern Hemisphere. If you are keen to meet the kings and queens of the Tasmanian sky, from the top of these dunes is a great spot for sightings
of the coastal dwelling sea eagle hunting its prey or the mighty wedge-tailed eagle soaring above its empire. We have also regularly seen juvenille Tasmanian devils searching the beach for food.

Upon reaching the Interview River, we find a safe crossing point.

Looking back to the north, the deep blue ocean rolls up against an expansive beach bordered by huge wind-swept sand dunes. The huge swells that relentlessly pound the Tarkine coast are generated thousands of kilometres away deep in the Southern Ocean. The dominant westerly winds, the Roaring Forties, circle the globe driving the swell all the way from South America, sweeping underneath South Africa before thundering onto the Tarkine coast.

Today we have the chance to either rest and relax around camp or embark on a day walk. Five minute’s walk north of the camp is the Interview River. The Interview River has carved a deep gorge through the surrounding landscape before emptying into a large lagoon directly behind the beach. This shallow lagoon is always warmer than the ocean and is the perfect place for a refreshing swim.

There is also an opportunity today to learn about our world class research into carnivorous populations on the Tarkine coast and in the rainforest.

This research is the first population study ever to be done in the Tarkine area which is amazing considering it is the last disease-free area for the now highly endangered Tasmanian devil.

Today is also a chance to take a trip back in time and explore the impact that European settlement had on Tasmania’s indigenous inhabitants. It is here that we learn in detail about George Augustus Robinson, chief protector of the Aborigines and his extraordinary mission along the Tarkine coast.

Today we walk for 8 kilometres along the Tarkine coast. Today’s walking has been described by some as “the ultimate geologist’s playground.”

A distinct change in the feel and layout of the land is evident with the beginning of amazing twisted rock formations and majestic rocky outcrops. Along with this rocky landscape comes a myriad of rock pools in which small yet abundant sea creatures reside.

Having lunch amongst these unique rock formations and breathing in the fresh air of the Southern Ocean is the ideal time to reflect on your journey so far. At times, the rocky headlands require us to walk inland. Scattered amongst the rocky landscape lie swathes of marsupial grazing lawns surrounded by wind-hardened coastal banksia, acacia and
tea tree.

After lunch, keep your eyes peeled for the endangered and shy hooded plover. Families of this cute coastal bird inhabit the high tide line of the Tarkine’s beaches.

Our last night’s camp site is 2.5km from the pristine Pieman River. The Pieman River has plenty of stories to tell. It has been commonly believed that the Pieman was named after Alexander Pearce who was involved in one of the very few cannibalism cases in Australia, however this is not correct. In fact it was named after a convict by the name of Thomas Kent, a pastry chef that was deported to Van Dieman’s land in 1816. At one stage he escaped and was apprehended at the mouth of the river which now bears his nickname “Pieman.”

Boat cruise down the Pieman River

Today we bid an early morning farewell to the Tarkine coast but we certainly finish it in style. The mode of transport to Corinna is a 2-hour boat journey down the rainforest flanked Pieman River. One of the boats still operating along the Pieman River is Arcadia 2, the last of the commercial Huon Pine river cruisers. The Arcadia was built in the 1930s and has a rich history of which our Ferryman will give us a detailed account.

On our travels, we cruise through the Pieman Gorge, passing the mouth of the Savage and Donaldson Rivers. These rivers have their origins in the heart of Australia’s largest temperate rainforest and are surrounded by ancient Huon Pines.

Upon arrival at Corinna and a welcome BBQ lunch we load into the van for a taste of the rainforest on our journey home. We travel the Murchison Highway with the drive taking us through the heart of the Tarkine, allowing us to experience the diversity of landscapes including rainforests, mountain ranges, buttongrass plains and tall eucalypt forests.

Some of the rainforests we pass through consist of myrtle, sassafras and giant tree ferns that are remnants of the forest that once covered the ancient continent of Gondwana. For the past 60 million years these forests have evolved, surviving vast changes in climatic conditions. The Tarkine is one of the world’s last strongholds of this remnant temperate rainforest, hence its international conservation value. It is then onward via Burnie and Devonport on our way back to Launceston.