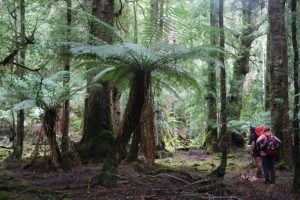 6 DAYS OF CAMPING AND FOREST EXPERIENCE

T1: Well defined and wide tracks on easy to moderate terrain, in slightly modified natural environments. You will require a modest level of fitness. Recommended for beginners.

T2: Narrower but distinct tracks which can be muddy in some places, in pristine natural environments. Facilities are minimal and you will encounter few other walkers. You will require a reasonable level of fitness.

T3: Marked but often rough and indistinct tracks, often on irregular ground, muddy and wet, in very remote and wild areas. These are challenging walks needing a high level of fitness and some hiking experience.

To truly experience rainforest you need to live it, breathe it, drink it – and walk it.

Tasmania’s only multi-day rainforest walk enters a vast, tree-lined cathedral – Australia’s largest tract of cool temperate rainforest. Recognised globally for its ecological significance, this forest is a living remnant of the prehistoric woodlands of Gondwana. The moss-covered understorey is surprisingly open and airy, making the walking highly accessible.

The Tarkine is one of the few remaining places where you can walk through temperate rainforest, unhindered by any sign or device of man for days on end. It is still largely unexplored as a walking region, making this track an incomparable experience of isolation, beauty and wildness. It’s a little bit special.

Drive south from Burnie into the Arthur River Valley – the forest grows thicker and more ancient around you.

Cross the Arthur river – now you’re in the Tarkine.

Leave behind the last signs of civilisation and walk into the wilderness.

Today contains the most challenging section of the whole walk. Two and a half hours of steady, but not steep, uphill climbing along an old forestry road.

After it collects you from Launceston, our bus makes its way through countryside that gets deeper and older the further we go. To truly enter the Tarkine we have to cross the Arthur River. The landscape we enter is one of profound age and stillness. The Tarkine is a remnant of the forests that once swathed the vast southern supercontinent of Gondwana before its breakup 60 million years ago.

The major ascent of the day takes around two and a half hours. This is the toughest uphill climb of the whole trip. But it is slow and steady and the old forester’s road is easy to negotiate. From this road we join a small trail and here evidence of the modern world disappears amongst the moss-covered myrtle and sassafras trees.

Our first camp is set beside the photogenic Mystery Creek.

Awake to your favourite morning beverage (you could get used to this) and a hearty breakfast on the riverbank.

Reach the Tarkine’s rainforest plateau and the largest patch of cool temperate rainforest left in the southern hemisphere.

Encounter the first of the giant stringybark trees that watch over the forest and the largest myrtle tree we’ve ever found.

Walk through the octopus’ garden, the first of many ancient myrtle groves.

“Ascending to the plateau has us leave the Eucalyptus behind and into pure rainforest. It’s a line in the sand that symbolises the battle between rainforest and fire tolerant species, an incredible story, told by the landscape itself.”

Today we finish our ascent to the plateau. The uphill sections are a moderate grade with two short sections of steep walking. After this we ascend gently to our night’s camp.

There is no better place or way to be woken than in the Tarkine with a steaming cup of your favourite brew. After breakfast we venture on. The forest structure changes and we encounter giant eucalypts. The Tarkine is home to some of the largest flowering trees on the planet – some of them are 80m tall and so thick that our entire group will be unable to link hands around their base. There is plenty of time today to take in these wonders of the natural world.

We complete our ascent to the fertile, volcanic plateau on which the vast rainforest flourishes.

Amazingly, this area has remained almost unknown to the outside world with many unexplored valleys and wild rivers. The day’s highlight is the Octopus’ Garden – an ancient grove

of myrtle trees twisted and contorted by the weight of centuries. Two deformed giants stand guard at the entrance to this fairytale corner of the forest. Fungi of every colour protrude from the moss.

Tonight’s camp is located on the edge of a forest ridge surrounded by myrtle trees, giant tree ferns and a carpet of green mosses and lichens

Three of the Tarkine’s special places reveal themselves.

An ever-changing and diverse range of vegetation.

Night stroll to the glow worm grottos beneath of Tarkine Falls.

The largest myrtle we’ve ever found.

One of the best things about walking in the Tarkine is the water. Mossy, filtered creeks criss-cross the forest floor making filling your water bottle a joy. The Tarkine’s largest myrtle (as far as we know) towers above this part of the forest, drinking deeply from the surrounding streams.

A glade of giant tree ferns. This 160 million-year-old species pre-dates even the ancient myrtles making it a visible and touchable link to our Gondwanan past.

The Shrine is a small waterfall that offers the opportunity for a refreshing drink and a bit of peaceful reflection.

Tarkine Falls. Before we stumbled upon this gem of the region, it had plummeted into its fern-lined trough unseen by white eyes for thousands of years. This is where we make our camp for the next two nights.

The Forest From Above

Views in every direction from Tarkine lookout. Hunting grounds of the endangered grey goshawk and wedge-tailed eagle.

No rucksacks! Again the track gently climbs across the rainforest plateau before crossing Eastons creek and then ascending for 30 minutes to a buttongrass hill.

Leaving backpacks at camp we take a diversion to Tarkine Lookout. The path traverses a number of pristine rainforest creeks, before hitting a solid wall of Bauera, Banksia and Tea Tree. This vegetation change marks the edge of a buttongrass island located in a sea of rainforest. It is a 30-minute climb to Tarkine Lookout and a breathless, heady feeling to emerge from the rainforest after days of immersion.

From the summit of this buttongrass knoll you start to get an idea of the scale of the Tarkine as it spreads away from you to every horizon. To the north, we view the Arthur and Keith River valleys, to the east stretches the 18 000 hectare Savage River National Park, and to the south and west lies the largest patch of temperate rainforest in the Southern Hemisphere. The endangered wedge-tailed eagle and grey goshawk both inhabit the Tarkine and can regularly be seen from the Lookout hunting above the buttongrass. It’s not a bad spot to have lunch.

Spotting for platypus and the giant freshwater crayfish in Eastons Creek. Heaven.

A short afternoon walk before setting up camp for the last time with views over the forest.

“I remember the first time I stumbled into Heaven like it was yesterday, the five of us were stunned by its remote and tranquil beauty. This is a place that requires quality time spent doing nothing, so that’s what we do.”

The track gently descends through the rainforest along the Banks of Eastons Creek. After lunch the route ascends out of the valley to camp.

Today we follow Eastons Creek through deep myrtle and tree fern country. It’s a gorgeous, peaceful walk with opportunities to see two of the Tarkine’s most elusive, rare and unusual residents – the platypus and the giant freshwater crayfish.

After crossing the river several times we come across a gorgeous waterhole, suspended between a tumbling waterfall and a gentle cascade. Call it what you like, we call it Heaven. It is one of the most luxuriant rainforest landscapes on the walk. Lunch is served here whilst we relax and soak up the sun and, for the adventurous, you can take a dip in the pristine pool.

The afternoon is short, just a quick ascent to a ridgeline that looks back across the Easton Creek valley and spectacular Blue Peak. After setting up camp for the last time we have the opportunity to relax amongst the ferns collecting our thoughts and memories to take home.

A warm welcome back to ‘reality’.

Today’s walk climbs off the plateau before descending along old forestry roads into the river valleys of the Keith and Arthur Rivers. From here it is a relatively flat, easy walk to the picnic location and your bus journey home.

It’s a sad goodbye to the Tarkine. We start our day by wandering through an astounding open rainforest.

The myrtle trees here have grown so thick and so old that they have blocked almost all light from reaching the ground. This makes it difficult for smaller, younger plants to grow. The result is an echoing, open space beneath a vibrant, moving canopy. Nature’s own Sistine Chapel.

We have great fun fording the Lyons and Arthur Rivers. The average depth for both crossings in summer is knee high water. Our guides will give clear instructions on how to cross safely.

And all of a sudden, amid the splashing of your final crossing, we leave the Tarkine behind. Your driver greets you with a cooked BBQ lunch and then we look back to the rainforest one last time before returning you to your life – intact but not unchanged.